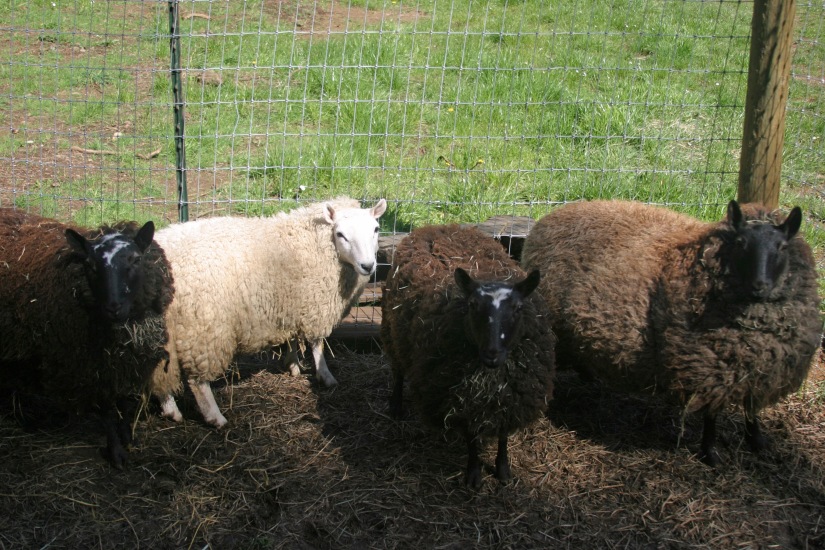 Let’s get some sheep.

What started as a funny comment become a viable suggestion and then we purchased four sheep–two at a time. Two ewes, named Iris, the HBIC, and Rose, the scrappy little sister, and two wethers, who I had intended to name Theon Greyjoy and Lord Varys. My 5-year-old got them first though and named them Marshmellow and Chocolate. Ah well, I suppose the kids should have a role in the naming process, too, even if the names aren’t nearly as entertaining to the rest of us.

We already have several animals–a horse and a goat, a bunch of chickens. Why not add a few sheep to the mix. We purchased four miniature Cheviot sheep from ranchers several hours inland. We like that they’re small–about the size of our Heeler, Matilda. They’re awfully skittish in most circumstances. You approach and they haul ass in the other direction unless you’re carrying hay–then they’re suddenly your bestie. But as soon as you think about raising a hand to pet them,  they run away.

Taking knitting to the next level

As a knitter, I’ve always been curious about spinning my own wool. There’s something about knitting or crocheting with a hand-spun yarn that is unlike anything else. It’s like a treat. Being able to raise my own sheep, shear them, process the wool and spin it to knit into something cool is the dream. Of course, it’ll also be a lot of work and I expect during the process, I’ll grumble a lot–because that’s how I roll. But, it’ll be one of those things I’ll look back and be stoked I did (like having kids, you forget the pain of childbirth. Though you never let your kids know that you’ve forgotten the pain of childbirth; how else can you guilt them into doing things?).

So, this will be a blog of our adventures tending our small flock, especially as we figure out what we’re doing. Wish us luck….we’ll sure as hell need it.

View all posts by laurakate527